We were saddened to hear what has happened in Woolwich. The Islamic Sharia Council considers this a barbaric act that has no basis in Islam. Our thoughts are with the victim and his family.”

Usama Hasan is a senior researcher at the Quilliam Foundation, a think tank specialising in counter extremism. He tells the BBC that the hatred preached by some Isla 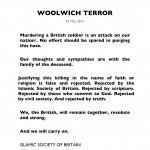 mic clerics has to stop: “The real problem here is the decisive hatred preached by a very small minority of clerics in this country in a small number of our mosques and universities. They know who they are and there are Muslim groups and other groups – left wing groups may I say – who defend that kind of grievance and victimhood mentality. That’s what must change and has to stop. A very small number of people but unfortunately their influence is too high.”